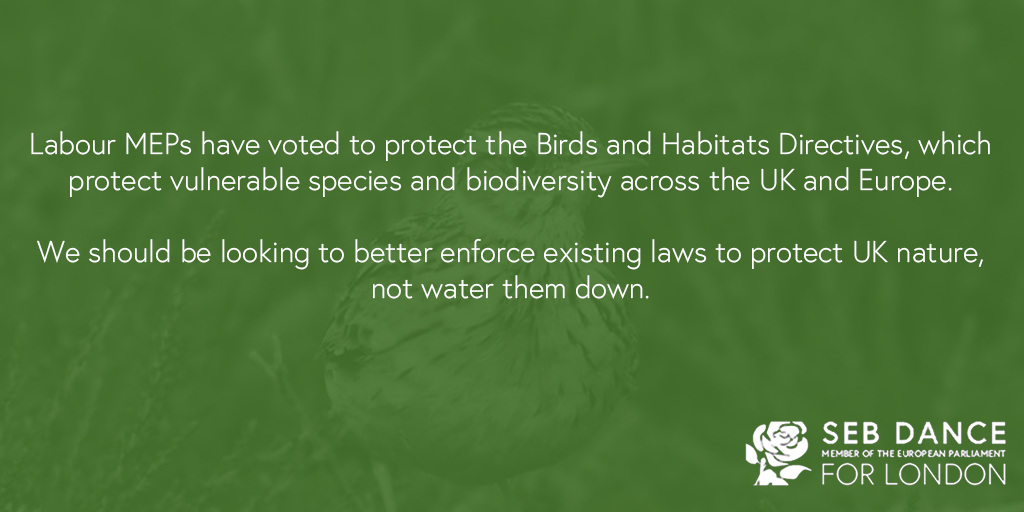 Today, Labour MEPs voted in the European Parliament to re-affirm a commitment to protecting vulnerable species and biodiversity across the EU and the UK.

The Habitats Directive, along with the EU's Birds Directive, collectively known as the EU Nature Directives, form the cornerstone of the EU's nature conservation policy and are central to the protection and preservation of biodiversity in the UK and in London.

Today's vote was in response to the European Commission's mid-term review of the EU's Biodiversity Strategy, which has set six key biodiversity targets to be met by the EU by 2020. Although some progress has been made, today's vote made clear that biodiversity targets can only be reached if implementation and enforcement efforts become considerably bolder and more ambitious.

Over 100,000 UK citizens and over 4,000 from London took part in the Commission's recent consultation on the Nature Directives.

'The Commission and UK government must resist any pressure to reopen or revise the Birds and Habitats Directives. The results of the consultation were clear, the public want more ambition, not less.

We should be looking to properly implement and enforce the current rules, not water them down. These protections form the cornerstone of the EU's conservation policy and are central to the protection and preservation of biodiversity in the UK.'