Press Statement: Why I held up that sign behind Nigel Farage 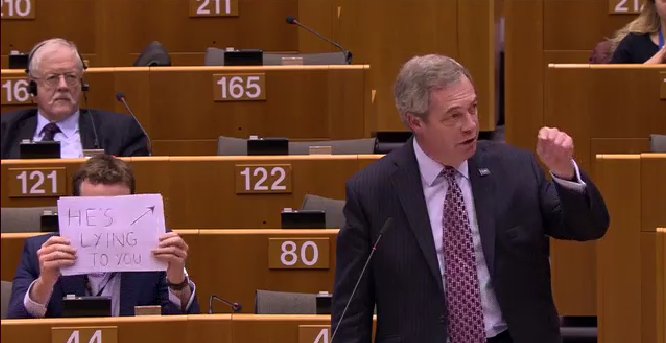 London Labour MEP, Seb Dance, has explained why he held up a sign saying “he’s lying to you” while Nigel Farage defended the immigration policy of Donald Trump in the European Parliament.

Speaking on his reasons for holding up the sign, Seb Dance said:

"Mainstream politics must be more willing to challenge the nationalists and the populists. They pretend to stand up for people who are suffering but their diet of hate, division and suspicion create only misery and poverty. It’s time to stop the nuanced language: They’re liars.”

"Nigel Farage is regularly treated to free coverage by virtue of being leader of the EFDD [UKIP's European Parliamentary group] and UKIP often use these clips in isolation on social media. When debates are time-limited it is impossible to challenge what he’s saying, so I protested in the only way I knew how at that point, which was to grab a piece of paper, write a very simple message on it and sit behind Nigel Farage during his usual diatribe."

For any enquiries please email Russell Antram at seb.dance@europarl.europa.eu